I’ve said this to myself a lot lately, and have heard it from others. Familial bad behavior. Embarrassing, and intolerable. Almost to the point of bailing.

In my research of my great-grandfather, Ras Boulds, I discovered some things that gave me pause. The illegitimate child, and later marriage of the child’s mother. The second out-of-wedlock child. No wonder he married the way-too-young Mary Stewart: Even in the small city of Hempstead, Texas, she wouldn’t have known.

Boulds is a common name in Hempstead now, but it wasn’t at the turn of the 20th century. So if your son is named Ras Boulds Jr. and you somehow run across another Ras Boulds Jr., just a few years older, it’s not hard to do the math. Even if you only completed third grade.

Perhaps this is why my family moved to Houston.

Knowing how my grandmother described her mother, perhaps someone told her, too, to hang in there. Perhaps someone advised her that a move would benefit them all, much more than kicking him out or staying in Hempstead, with all the reminders of his randy youth.

More than a century later, it’s uncomfortable reading of Ras Boulds’ past. His second son, Robert, married and had several children; I believe their descendants — and perhaps those of his first son, the elder Ras Jr. — live in Hempstead to this day. Very distant cousins.

But these are facts, and verifiable ones at that. I need them, because so much of what I knew of his past was myth or conjecture. No known date of birth; supposed biracial son of a servant (slave?) and possibly Jewish head of household, taken in and raised by that family; railroad surveyor in an era where, if his supposed heritage was known, he couldn’t have ridden a train in the car of his choice. I don’t know if he passed for white when convenient, or passed for mulatto for love (or sex).

So, now that my own circumstances are a wee bit more settled, I turn back to those of Ras Boulds. He may not have regretted walking away from the first 30, 40 years of his life, but his descendants deserve better. It often feels like digging a hole with a spoon. But I will hang in there.

My AAGSAR partners in discovery have helped set me on some promising paths of discovery. Also, I have reviewed Ras Boulds’ death certificate — while it has almost as many question marks as his life, it does offer one fat, juicy tidbit: years worked for SP and H&TC railroads. I’m hoping Aunt Eva (my great-aunt) was right on this one. So I offer this bit of advice: Periodically review documents, even if you have reason to dismiss them. Things can be overlooked. Another example of same: It wasn’t until I learned of his first marriage that I noticed the “M2” designation by his name in the 1910 U.S. census.

Posted in Uncategorized and tagged Boulds. Bookmark the permalink.

The AAGSAR Spring Challenge is in full bloom. People across the country are using technology, collaboration and plain hard work to unearth the mysteries of our ancestors and, as a result, get clearer pictures of our own heritage.

Ras Boulds, my great-grandfather, is my challenge. I seek the identity of his parents, birth or otherwise — something I’m not sure he ever fully knew.

He married twice, sired two sons before his second (and final)marriage, never knew his true birthday (instead, he claimed Christmas Day), claimed to be black and Jewish but perhaps was neither.

I will find him and his parents, and finally reveal his truths a century and a half later.

Is it silly to fear dead people? Perhaps silly is not the right word.

I’ve taken on this Ancestor Challenge, along with some wonderful folks engaged in their own searches and journeys. Ras Boulds — my dear grandmother’s dad — is my challenge. He’s always been an enigma. He appears to be more. But I didn’t really want to see how much more.

But others wouldn’t let me. As I found hints of Ras’ other life, they found more — and refused to let me turn away.

Thanks to them, I looked afresh at documents I’d had for some time. And saw something totally new: on the 1910 census, a short code — M2. It means twice married.

A quiet affirmation of a marriage certificate with a differently spelled name, a child named for him, a notation on a death certificate.

M2. Is this why my great-grandmother never seemed to smile, why she traveled without him, why they left Hempstead, why my grandmother looks nothing like her dad?

But they stayed together, for forty-some years. He built her a house, retired half a continent away at her behest, died not 18 months after she did.

Back to the past

It has been a long time. Very few discoveries have been made during that time. But it seems that the moment I came back to my research, I was rewarded with results.

1. James Marryatt, my international man of mystery, became a naturalized U.S. citizen in late August 1873. Days later, at the start of September, he registered to vote in San Francisco. Another book, detailing the life of his one-time employer, Charles King, told of Marryatt accompanying King to New Haven, Ct., also in the early 1870s. He married Adaline Hawkins at about that time as well.

2. My great-grandmother, Narciss Hughes DeLeon, has parents: Lizzie and Woodford Hughes. And grandparents: Caroline and Isham (Isam?) Hughs, the latter born in 1799 — my first 18th-century ancestor.

Thus I have new leads to pursue, along with the colder trails.

The 1940 census got me going on the DeLeon trail again.

My grandfather, Albert W. DeLeon, was born in 1896 in Bay City, Texas. Bay City wasn’t much older than he was; it was founded in 1894 with the intent of becoming the seat of Matagorda County, which is right on the Gulf of Mexico.

Read a brief history of Bay City’s founding and it notes that schools were set up in short order, for both whites and blacks. The school for colored students opened in the fall of 1896. Its first teacher was none other than A.A. DeLeon — my great-grandfather. Just months before the birth of his son, my grandfather.

This school that my great-grandfather helped found only went through eighth grade. Students who wished to continue their schooling had to travel as far as Houston and beyond. Big question: Did my grandfather, who I know had two years of college, leave home as young as 14; or did his father educate him through his high school years? He’d been homeschooled as a young child; might it have resumed in his teens? My grandmother referred to her father-in-law as a “professor”; he could well have prepared his son for college.

Filling in the blanks

Anyone involved in African-American genealogy knows that 1870 is a bit of a roadblock. I grant that it will take me years to solve my family mysteries in the antebellum South.

Meanwhile, I remember that there are more recent mysteries to solve — some of less than a century ago.

The 1940 U.S. census was released this week, and I found my family — grandparents, uncle, aunts and, for the first time, my mother in short order.

That’s when the questions formed.

I don’t know much more about his primary and secondary education. I know he was homeschooled up through about age 7, until he’d had an operation to correct a severe case of strabismus (cross-eyed). I know nothing about high school. Further complicating matters: His father was a teacher (and his mother was dad’s former student).

At what point will I have more answers than questions?

Deep in the heart of Texas

Going nowhere fast with Virginia and New Mexico, so I thought I’d revisit the Lone Star State. After all, I’ve got several lines there that have holes.

I had been less than successful with FamilyHistory.com, but somehow got back there through search. As usual, tracking the elusive Ras Boulds, who was born in 1860 but doesn’t seem to exist prior to 1900, and remarking on all the misspelled names. Especially my grandmother’s, Marguerite.

Then one jumped out at me, from a document I hadn’t seen before: Texas Marriages. Marguriett (sic) Boulds and A.W. DeLeon, married 24 November 1920.

Although there are other errors: He was born in 1896, not 1899, and thus was 24, not 21. But it’s the real deal. Very nice complement to the original marriage certificate, which I have.

So while in Texas Marriages, I did a bit more rummaging and surprise! Found Algeron A. DeLeon and Narciss Hughes, who were wed 22 December 1892 in Matagorda, Texas. Yes, my great-grandparents.

My grandmother never knew her mother-in-law; she died before my grandparents met and my grandfather didn’t speak much of her.

Narciss Hughes DeLeon died on 9 January 1919, of tuberculosis. She was 43 years old. My grandfather was just 22 years old. She lived her whole life in Matagorda. More clues: a birthdate (15 February 1875) and parents’ names and states of birth. Best of all: an image of the death certificate.

And then there are the Stewarts. When I first started researching my family, I started with them because my grandmother knew the most about them, and because “they always took part in the census.” Low-hanging fruit, I figured. Sure enough, I found them in the 1880 census … and could never find them again.

Found. Bad misspellings — Ainik Stewort! — but thanks to an unusual first name, Sofa, and an exceedingly common one, Mary (my great-grandmother), I connected the dots.

Deep, deep in the heart of Texas…

A couple of nights ago, I was privileged to hear Isabel Wilkerson speak at Oakland’s African American Museum and Library. You may know that she is the author of “The Warmth of Other Suns,” the epic telling of the Great Migration, whereby some half of America’s blacks left the South and resettled in the North and the West.

(If you haven’t read it, do so. It’s a wonderful read, easily he best book I’ve read in ages.)

It is about history, not genealogy; but genealogy is history writ small, and so this grand history — made digestible by narrowing down to three people on three paths — is the history of many of us. It *is* our history.

Our individual histories are just that: individual. But the collective triumphed Wednesday: as many of us claimed Texas or Louisiana as home; as we laughed at and applauded all we had in common. 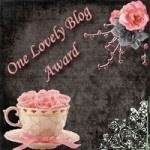 I am honored to have received the One Lovely Blog Award from Mavis of Georgia Black Crackers and Conversations With My Ancestors . Thank you so much.

The recipient of the One Lovely Blog Award is to

Steps 2 and 3 will have to wait until tonight. There are a number of blogs in the genealogy community I certainly want to recognize.

Posted in Uncategorized. Bookmark the permalink.
← Older Posts
→
All Roads Lead to California
Create a free website or blog at WordPress.com.
Loading Comments...